In a previous post, I noted that the shape of things to come in Turkey is getting similar to that of economic crisis occurred in South Korea in late 90s. I accept that in term of economic dynamics, South Korea differs much from Turkey as well as periodically 1997 does the same from 2014. However this should not be such a interceptor for a few points to worth stressing and I think in some way what South Korea experienced in the past could be a lesson for Turkey.

What Happened in South Korea?

Just before focusing on South Korea, 1997 was a period of financial crisis that gripped much of Asia. Cyclically Thailand, Indonesia, Philippines and others were in a deep crisis, not only South Korea.  Moreover, one can suggest that now Turkey looks like 90s’ Asia in general, for some reason it looks much more like South Korea.

Turning to back to horrible events occurred in financial environment of South Korea, its banking sector was burdened with non-performing loans as its large corporations were funding aggressive expansions. You may guess how the story goes on starting this point. External financing depends on foreign investors’ optimism and accomplishments by South Korean business, but also keeps the system fragile. Emergency loans asked by Koran chaebols and capital outflows quickly turned to be a sudden death for the economy, as a huge financial turmoil was about to break out in the region.

Kim Kihwan, who is Chair of the Seoul Finance Forum, International Advisor to Goldman Sachs and Chair of the Korea National Committee for the Pacific Economic Cooperation Council (PECC), made a remarkable speech at a seminar organized by the IMF (see the full presentation here). 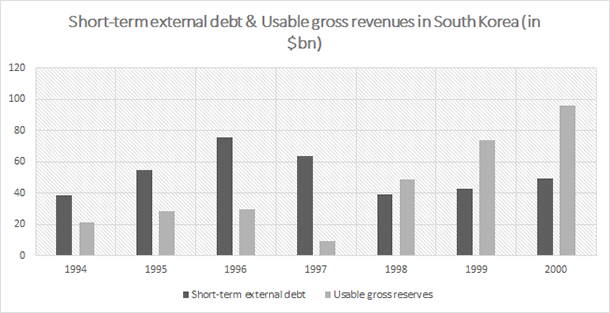 The total amount of short-term external debt is explanatory indicator how things derailed in the country and how shortsighted the policy makers were. In 1997, the short-term liabilities were seven times larger than the foreign exchange reserves held by the Bank of Korea. This debt stock is even more disturbing when the demand for US dollar rise all around the world. The DXY chart shows above how the demand had risen between the mid of 1995 and 1997. This was a consequence of Washington reversed its policy and considered a strong dollar as in its national interest.

I find it crucially important that these seven lessons we shall draw from the Korean experience are characterizing enough to shape the ideas on Turkey.

Numerous critical papers have been written about Turkey’s imbalances mainly emphasizing the large current account deficit and how it is financed. See the IMF not here or some striking warnings for an upcoming currency crisis. Also, Emre Deliveli, a columnist at Hurriyet Daily News and die-hard Besiktas fan, here explains how the composition the financing the deficit evolves (I guess the chart in his article may easily be the harbinger of death for the economy).

Foreign direct investment (FDI) could be disrupted as well. Turkey’s external financing has been short-term of late, and some FDI would make the country sturdier against a sudden stop of capital flows.

Thanks to unstoppable power of globalization, a crisis may emerge globally rather than regionally (as it emerged in Asia in late 90s). What is more, Turkey is already listed in the list of fragile economies with Brazil, Indonesia, India, and South Africa.

For more about Turkey, I firstly intent to demonstrate how the short-term foreign debt exposure became clearly frightening compared to the usable reserves, just like it was in South Korea. 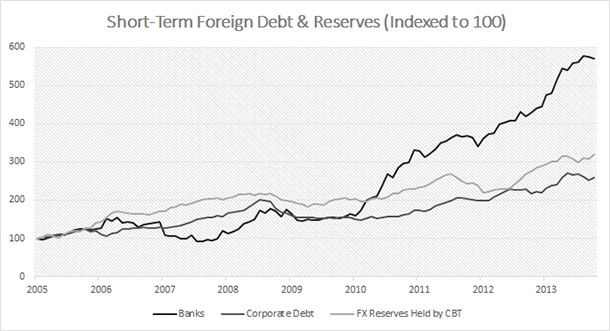 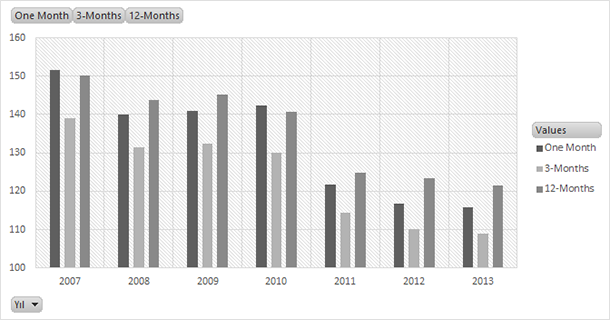 The chart above show the assets to liabilities ratios that both mature in one month, three months and twelve months, respectively. According to the Basel Accord application run by Banking Watchdog (BRSA) the ratio must be over 100 and it looks like that the financial institutions in Turkey are getting closer to the lower limit. If you still believe in the myth of the profitability and sound capital structure of Turkey, don’t read this article.

More specifically, I find it necessary to touch upon the question of if there is real estate bubble in Turkey to burst. Recently, I published my work related to housing bubble and answered the question with a “no” according to the price data but the like everybody else, I can’t help but think that the construction as industry is a bubble in Turkey. There is need for rethinking it all just after the “corruption probe”. Here is a nice piece of writing by Financial Times, Turkey probe underlines links between construction and politics.

While the banks are deep in debt, the funding of construction activities do not increase that fast but industrial distribution of non-performing corporate loans tells us a horror story. The peak we see in the chart below after 2010 means that much more amount of loan is in the red territory. 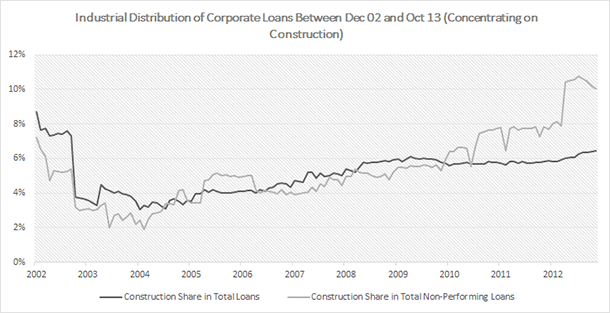 And at last, the relation between GDP and the construction is as follows:

In financial terms, the construction can be considered as a high-beta industry but definitely a pre-indicator for macro outlook. See how the construction begins sinking in 2006 before the recession period starting in 2008.

Why A Comparison of Turkey & South Korea

These two economies has similar vulnerabilities arising out of short-term foreign debt and financing the business that is likely to fail with this debt. In 1997 Washington decided to defend US dollar and in 2014 Federal Reserve is to quit its zero-rate interest rate policy and reduce the size of its balance sheet. What is more, both South Korea in 1997 and Turkey now have well-balanced government budgets. At past, it prevented Korea from a sovereign default risk as it may help Turkey too. However, it could not be possible for Korea deal with a crisis arising out of private sector.

After 2001’s financial crisis, high regulation standards for financial institutions took effect in Turkey, however we begin to see some defacto deregulations recently. This is a mistake that caused a trouble in South Korea 14 years ago.

I do not definitely seem like a doomsayer but in my opinion the data says that the bells are tolling for Turkey. Even if there is a large difference between today’s Turkey and 90’s Asia. Nevertheless it is not that hard to estimate how capital outflows influence emerging market and the question remains: How will Turkish economy do ahead of a turnaround in the global financial system?