On July 15, there was a strategically inept and thankfully failed coup attempt in Turkey, which, in fact, was destined for failure and would lead nothing but a civil war. It was that latest mishap in a long series of political events, and is now being followed by a purge of civil servant linked to the Gulen movement which is widely believed to have plotted the military intervention and a state of emergency that is expected to last 3 months at most. Given the death toll over 240 only in hours, Turkey had a narrow escape from clashes that would lead huge losses.

With broad strokes, political implications will be much bigger deal than economic ones. First, even if it had significant flaws, Turkey’s democracy has always appeared to be immortal, however, we here had a completely unexpected coup attempt. Though, the democracy is still alive in Turkey, but the political landscape is worsened. The government should clean up the public sphere as quick as possible. And another thing is that the issue of Gulen’s extradition may have the potential to create significant tension between Turkey and the U.S., and it could also affect Turkey’s relationship with NATO. However, we do not see a radical shift in Turkish foreign policy at that point. Remember that Turkey already was in a re-approachment process with Russia and Israel that had been extremely well-received by the market.

Noting that politics will continue to be a main source of volatility, the economy will remain relatively resilient with growth rate around 3% but investor sentiment will surely stay fragile, not just because of Turkey-specific factors but due to weaker capital flows to emerging economies across the board.

Meanwhile Turkey received a rate cut from S&P following the coup attempt. Turkey did not have an investment grade at S&P (while it had Moody’s and Fitch) and saw its rating being dropped by one notch from BB+ to BB. The cut was primarily due to polarization of Turkey’s political landscape eroding its institutional checks and balances and heightened unpredictability that could constrain capital inflows into Turkey’s externally leveraged economy, according to the agency. The rating action came under heavy criticism for being premature. We believe that analyst comments were justified given a comparison with South Africa which is rated BBB-. More surprisingly, S&P upgraded its outlook for Turkey in the days following the Davutoglu’s oust which also kicked up a dust at the top of the state. Also note that S&P, in fact, upgraded its outlook for Turkey and now foresees a 50 basis point higher growth in USD nominal terms for 2019, but a higher net external liabilities to current account receipts. The changes in S&P estimates are given below. 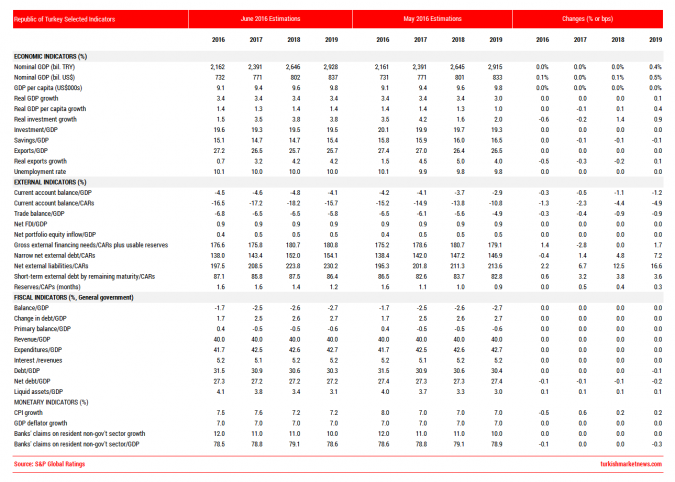 Going forward, the key incremental risk for the economy will be declining tourism revenues and higher oil prices that would weigh on the country’s current account balance widening the deficit. As a result, we might see a weaker local currency. We predicted that USDTRY exchange rate would average 3.00 this year, suggesting a depreciation around 10%. Lira hitting 3.20 versus the US dollar were also in our baseline scenario, so we do not consider the current valuations in the FX market as a sign of shock. We also estimate bond yields going higher as core inflation will see a pick-up in the coming months.

In equities, we saw a sharp sell-off as expected but now there seems to be a potential value play. In banking space, we still consider Akbank as the most attractive stock but more importantly, there are screaming buying opportunities in industrial stocks from a historical view of multiples.

Overall, risks for the Turkish economy in a medium-term perspective has not risen significantly following the coup attempt. Turkey’s investment grade might be at risk while even ratings of the foreign companies with exposure to Turkey are under scrutiny. This would lead bond funds with their fingers on the sell key. Note that should the government uses this as a chance to reconcile public divisions, Turkey even would obtain an upgrade. Thus, a wait-and-see mentality on Turkish debt market should continue. Equities trade cheap (<8x) relative to its own history and, especially, versus GEMs >12x, on the earnings multiple. Note that capital market regulator paved the way for buybacks that should also unlock more value for shareholders.

Disclosure: The author has no positions in any stocks mentioned, but plans to initiate positions within the next 72 hours.