Turkish central bank cut its overnight marginal funding rates by 75 basis points in the past two monetary policy meetings in an effort to simplify its interest rate structure as the volatility in global financial markets eases. The rate cuts came amid criticism by the government over high interest rates limiting the economic growth. With year-end inflation expectations around 8% and the central bank’s average funding rate of 8.5%, one would call the current stance of the central bank extremely dovish, however, it still fails to boost bank lending which is believed to bring economic expansion with increased investments, according to the top politicians of the ruling AK party.

The central bank sees the current loan growth in Turkey at reasonable rates, correspondingly, in harmony with its macro prudential measures, and views structural reform measures by the government as the needed policy tools to boost potential growth. Previously we stated that Turkish central bank seemed to lose its ability to impact interest rates in credit markets as the divergence between the loan-deposit rates and the policy rate became strikingly visible. Another issue we mentioned was the skyrocketing loans-to-deposits ratio making the financial system increasingly vulnerable. This would suggest a weakness in banks’ tendency to pump up more funds into the economy to a certain extent despite the growth-friendly rate environment. On the other hand, we saw the state-run banks still recording above industry average loan growth which has been completely in line with the government’s strategy. 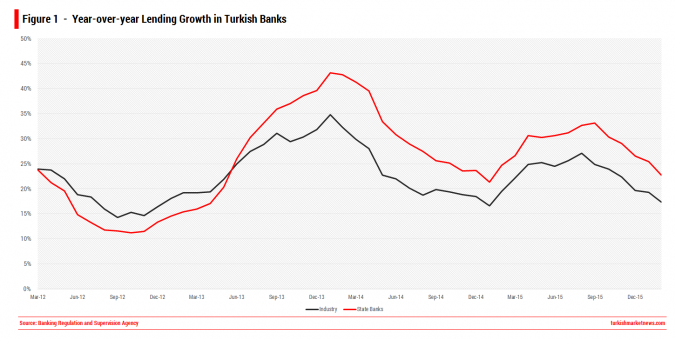 As expected state-run banks in Turkey has outperformed their privately-capitalized peers in Turkey by a substantial margin over the past three years in related to the lending growth as they have increased their market share from 23.3% in March 2008 to 32.8% in February 2016. Not surprisingly, loans-to-deposits ratio has been higher in state-run banks that that of the industry.

With aforementioned points made, we are very likely to see the banks’ deposits book on conditions that easing inflationary pressures and less volatility in exchange rates. Then, Turkish financial institutions would have stronger funding base to finance the lending growth. Yet, any unexpected easing steps from Turkish central bank would prevent these conditions from being fulfilled.

In terms of lending capabilities, Turkish banks are still in a better condition than some of developing economies. However, it is the only country with a loans-to-deposit ratio above unity that saw an increase between 2011 and 2015. Moreover, majority of the emerging markets have seen decrease during the same timeframe. Going forward, we believe that external debt will continue to build a scenario full of funding challenges for Turkish banks.