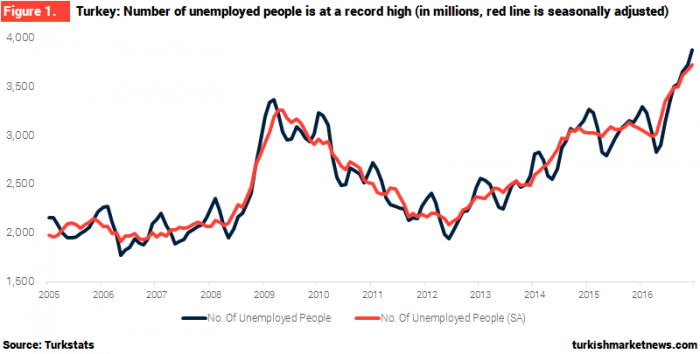 The unemployment rate in Turkey rose by 1.2 percentage points y/y to 11.3% while the non-farm unemployment rate climbed to 13.7%. This August job report marked another step in deceleration pace of the economy.

Partly due to the purge following the coup attempt and struggling tourism sector, Turkey lost 614K non-agriculture job in the three-month period ended in August of which 356K came from services. In seasonally adjusted terms, total decrease was 219K (-162K from manufacturing, -113K from construction, and interesting +55K services). The report build a supportive case for a slowdown in the economy to the hilt during the 3Q.

The rising unemployment is likely to influence asset quality in the bank through its pressure on retail loans and credit cards. Traditionally, an unemployment rate above 12% is alarming and potentially would lead a major deterioration. Since the official figures still remain below that threshold, we can comfortably say it is groundless to be pessimistic for the time being, however, we recommend investors to keep an eye on upcoming job reports.

Labor market data for February 2016 was released early this week. The unemployment rate was down 20 basis points on monthly basis to 10.9% according to the official figures. The employment rate also saw a pick-up and stood at 45.3% while workforce participation rate was 10 basis points higher at 45.3% compared to January. In non-adjusted terms, Turkish economy added 181K jobs of which 117K was in non-farm industries. However, manufacturing jobs decreased by 24K in the month while it was more than offset by the strong performance in services.

We see its fit to analyze the adjusted data when it comes to study the dynamics of Turkish labor market and its relationship with the overall economy. According to the report, Turkey added 50K jobs in non-farm industries, and again 24K job lost in manufacturing was compensated by 55K new hires in services. The unemployment rate fortunately dropped to a single-digit level at 9.9% with non-farm and youth unemployment rates at 11.9% and 17.4%, respectively.

A while ago we mentioned that Turkey lacked the ability to create jobs despite recording positive growth. Not surprisingly, the policy makers came under fire against this backdrop. February saw the first single-digit unemployment rate since May 2014 when calendar effects excluded, could be signaling a new era for Turkish labor market but first we need to see to continuation of the recent trend.

But it is not all rosy and here is the bad point we gleamed from the labor market. Manufacturing job which are normally the main source of a healthy economy, continue to plunge. For the fourth consecutive month, the industry lost 20 basis points share in total unemployment as only 24.3% of the total workforce was employed in manufacturing, down from 25.1% in October 2015. This is critically important for any economy since non-manufacturing jobs are considered as less paying jobs, that is to stay, increasing manufacturing job is developing economies’ gateway to being a high income society.

On the economic expansion front, 171K non-farm jobs created in only two months was clear sign of solid performance in Q1 2016. We recently studied the relationship between the new hires in non-farm industries and the GDP growth, and found that the number of 185K (or 65K monthly) could function as a threshold to assess the overall economy. Yet, Turkey’s strong economic performance is evidenced by the newly added payrolls in the first quarter. With broad strokes, this is in line with our positive views about economy.

Considering that Turkey watchers have been concerned about credit metrics in Turkish financial system, we need to put some emphasis on the impact of unemployment on asset quality in consumer loans. Anecdotally, Turkish banks do not receive a major deterioration unless the rate of jobless people remain above 12%. Thus, we are of the opinion that the current developments in the labor market will not have negative consequences for lenders.