Declining volumes in currency trading has been an overriding theme as banks have been subject to stricter regulations on their trading activities. It is early to talk about the recent Trumpflation trade has caused any change globally, but when it comes to trading Turkish lira we still see that shrinking volume is an underlying trend.

Below we present the chart that shows total annual TRY trading volumes in form of forwards, spot trading and swaps.

Clearly 2013 was a turning point when uncertainties around emerging economies started to loom, leading stronger corporate demand for forwards to the end that hedge their FX risks. That period also marked the banks losing interest in TRY spot market. More importantly, we saw a huge drop in swap volume which is consistent with our voluntary deleveraging theory which simply based on Turkish banks’ weaker demand for foreign financing given the extremely high loans-to-deposits ratio (In Turkey banks have increased their foreign borrowings to finance the lending growth due to weakness in deposits, used swaps to hedge those positions). We believe that this credit positive, growth negative.

We note that spot trading volume of TRY declining roughly 14% y/y is worrisome that the currency is now more exposed to liquidity risk. As reported in some media outlets, global investment banks are now kind of through with TRY market. We expect TRY to remain volatile for some time come, which could partly offset by rate hike by the central bank. Our prospect is for a 2017E 10% policy rate and we recommend investors to consider 1-year xccy swaps afterwards. 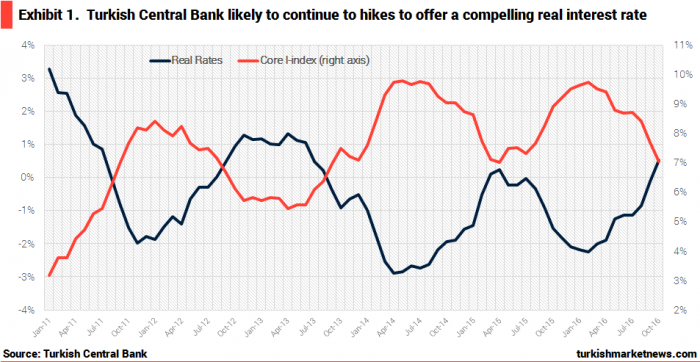