Turkey’s real GDP grew by 3.1% y/y in Q2, below the market consensus of 3.7% and our estimation of 3.4%. Of that growth number, 3.4% and 1.7% came from household and public consumption, respectively, which were partly offset by weak foreign demand that a negative impact of 2.2 pps on growth. Aside from being lower than expectations, the GDP report has some worrisome points including a public demand taking on a progressively larger role in driving economy.

In seasonally adjusted terms, output rose by 0.3% q/q, down from 0.7% in Q1, its worst reading in two years. Household consumption contracted by 0.5%, whereas investment expenditures and government spending posted positive growth figures of 5.4% and 3.8%, respectively.

Another worrisome point is the composition of investment expenditures which has been increasingly reliant on construction. To be more precise, in real gross capital formation for both private and public, construction expenditures grew by 6.9% and 6.8% y/y while machinery & equipment investments declined by 5.2% and 5.8% y/y, respectively. Considering the characteristic of an emerging market, one would realize how huge risks are posed when construction is boosted in that way.

Below we conduct two analyses in order to show changes in Turkey’s GDP composition from a sectoral point of view. Clearly, financial services have been the winner in the recent economic environment as agriculture seemed to be set for losing ground. Meanwhile, manufacturing still lags behind in output growth.

Going forward, the government and the central bank will be under increasing pressure to support economic activity as growth slowed down sharply than expected. We believe that the current pace of the decline in average cost of funding which has circa 15 bps per month in the recent months, will not be enough to stop the slowdown, therefore pressure on fiscal policies are very likely to rise. Concerns around policy responses to this pressure are, in our view, justified at this stage.

Note that Q2 data predates the July 15 coup attempt which caused a serious confidence loss as evidenced by 7% y/y decline in industrial production. We expect downtrend economic activity to be more pronounced in 3Q.

Turkey GDP grew by more than expected (2.3% versus 1.6%) in the first three months of 2015, data from Turkstats showed on Wednesday. Despite the fact that the reported figure signaled a below par growth in the country, we saw the pressure on Turkish assets easing for a while following the economic data. However, a rethinking about the country’s growth regime is needed given that for the last thirteen quarters it has been posting growth numbers below historical levels.

The strongest component of GDP was consumption in 1Q15 which was up 4.5%. The positive impact of boosted consumption was offset by the decline in net exports. The below is a visualized form of contribution of each components to GDP that shows consumption in Turkey has a strong (reverse) correlation with imports (net exports). At industry level, financial services sector appeared to the best performer in 1Q15.

Turkey’s current account deficit fell by $1.52 billion to $3.41 billion in April, yet exceeded the expectations of $3 billion.

The unaccredited inflow of foreign currency rose to USD 2.89 billion in the same period, more than 10 times the USD 258 million registered a month prior, rising to USD 6.98 billion in the first four months of the year.

Other important reason that limited the rise in the current account deficit in April was gold exports of USD 1.82 billion, compared to USD 307 million of net imports in the same month of last year.

The country just printed another bad current account deficit which was 5.7% of the country’s total GDP. The following chart shows the ratio by countries where Turkey is shown red.

Ultimately, macro data shows that the structural reforms are needed for the future of Turkish economy. As the country is headed to a change in politics, we may also see a shift in economic 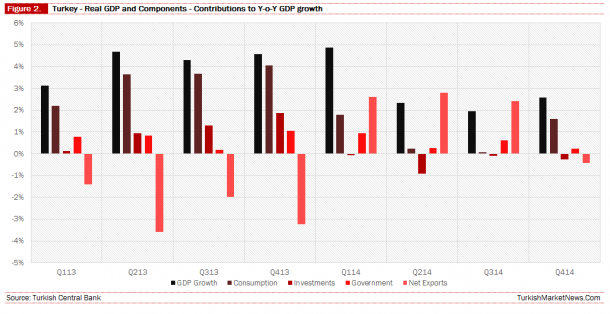