At 4.45 year over year, GDP in the third quarter of 2013 came in stronger than estimations (market consensus was 4% year over year). 9-month basis growth was 4% setting light to year end forecast. Reviewing the composition of growth, final consumption expenditure contribution was 3.3%, while net exports was a 2.2% drag. Moreover, financial sector was standing with a contribution of 1.3%. 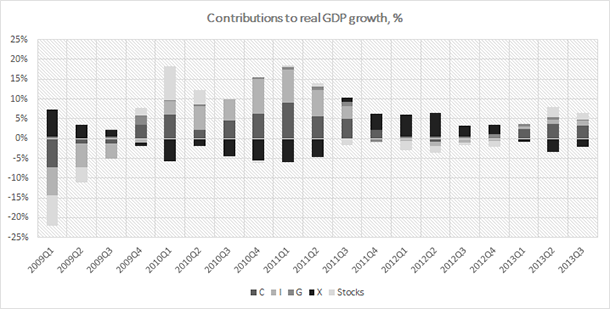 The most encouraging trend of growth showed is the net contributions of private investments. that had been generation a negative print for the last six quarters. Meanwhile, public investment that had been the strongest component of the growth is losing momentum.

Based on analysts’ estimates, the last quarter growth GDP is likely to be negative quarter over quarter and expectations of a 4% GDP growth in 2013 is widespread.

Therefore, even though the hopes as to the favorable adjustment in the savings side, some signals for current account deficit is likely to remain visible for some time.

It is too early to say that Mid-Term Plan has fallen flat.

Not sure about where the mixed Industrial Production data is leading the economy heading into. Due to some holiday effect it did not give us a clear picture but positive.