Turkey is set to post one of the weakest GDP growth readings in Q3 since the global financial crisis. In a previous post, we mentioned that the quarter ended September may not mark the beginning of a period of low growth with tepid economic performance. However, what Turkey has been experiencing for a long time is in fact a secular slowdown, or an economic crisis in slow-motion, to speak clearly. Speaking of short term predictions, while the pre-indicators not giving a clear picture for Q4 yet, we believe that Turkey has enough resources to save the quarter. 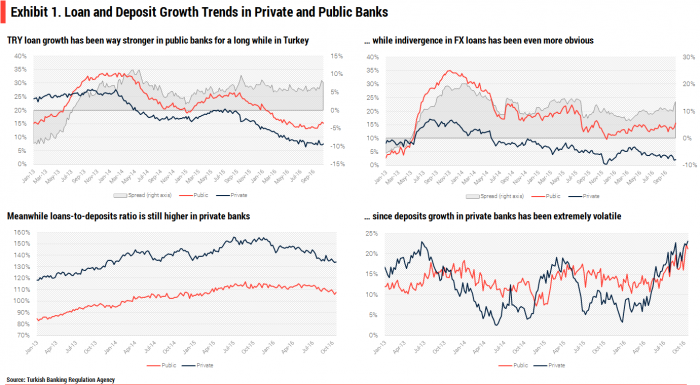 Of course, that would not mean the end of the slow-motion contraction as we call it, but we expect the economy perform better in Q4 compared to the linked quarter. The charts above speak for themselves at this point, all suggesting faster lending primarily led by public banks (state-run) will potentially provide some relief. That said, relatively higher loan growth in public bank is a phenomenon that is going back a long way in Turkey. For the time being, y/y TRY loan growth stood at 15.2% and 7.5% in public and private banks, respectively. The divergence in FX loans is even more obvious with growth rates of 15.6% and 2% (in USD terms).

Still, we claim that public banks are more capable of maintaining lending at fast pace as evidenced by loans-to-deposit ratios (see the chart located at left-down). Now TRY loans are almost 1.35 times TRY deposits in private banks, remarkably lower mid-2015 record level of 1.55. On the other hand, we see public banks operating with a spread of 108% as of yet, suggesting a safer outlook regarding the liquidity. Key consideration in our view is the strong deposits base in public banks as they have been the financial institutions that most municipalities and governmental bodies work it.

Over the long term we need the risks appetite in private bank resuming for lending in order to accelerate the economic activity of which for now we have not received signals yet. We recommend investors keeping a close eye on banking sectors data within this context since it is sending attention-grabbing premonitory signals for the economy.