Trending
You are at:Home»Macro View»The Impact of Credit on Turkey’s Growth

Credit impulse is an economic measure first introduced by Deustche Bank economist Michael Biggs. It is simply the change in new credit issued as a percentage of GDP. The conventional method measure used when associating developments in credit with developments in domestic demand is credit growth which actually is the growth in the stock of credit. But one should consider that domestic demand depends on the amount borrowed in a particular period, or the flow of credit. If this is correct, then growth in domestic demand is a function of growth in new credit issued, not growth in credit. Therefore the impact of credit on demand would also depend on the amount of credit extended relative to the size of the economy. As a consequence, the generated measure named as “credit impulse” at this stage emerges as a very helpful tool to overcome this issue.

Based on the methodology explained here, this is how Turkey’s credit impulse looks like. 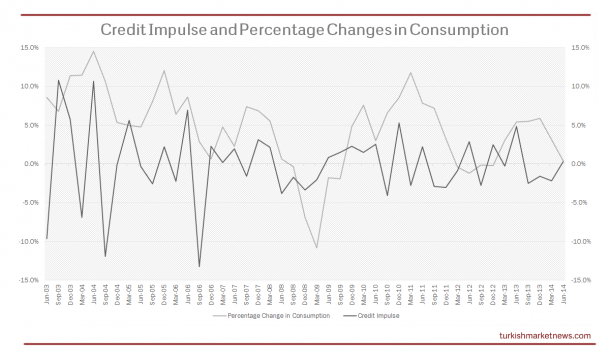 I also recently posted that we would probably see a cyclical increase of consumption in the third quarter of this year. As expected this will lead a remarkable rise in GDP. Additionally, high GDP growth in the third quarter scenario was also backed by the August’s official industrial production data which reveals 5.2% rise in production activity on yearly basis as well as is visualized as follows. 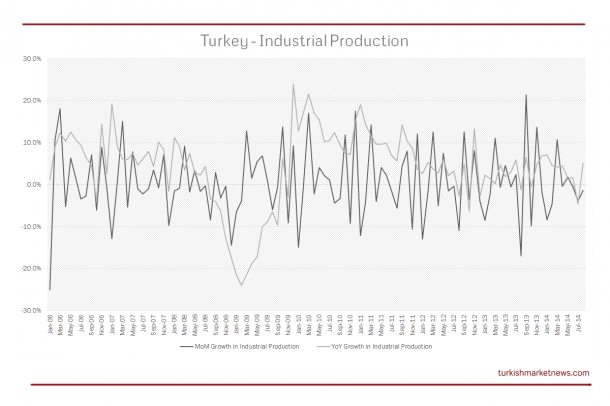