Debt saturation, an economic term commonly used for today’s developed markets where the excess-liquidity-led more-debt-less-growth conundrum is faced, is becoming more increasingly relevant to generally accepted discourse on Turkish economy. While the country already had been through a severe credit crunch over the past two quarters, the weakening relationship between (slowing) growth and (rising) debt was a long-standing issue in the economy.

To put a more finely definite light on debt saturation, or named as debt exhaustion in some extreme cases, it is the economic phenomenon in which returns on additional debt are increasingly marginal. During the debt-saturated times, typically, lenders can no longer find creditworthy borrowers, and borrowers either don’t want more debt or can’t afford more debt. The cost and risk of any unit added to the debt far outweighs the meager gains. This usually happens in any economy when reliance is heavy on borrowing from the future to find growth today. In most cases, this is a result of short-sighted designed-to-implode policies.

Looking for signs of debt saturation in Turkish economy, the first useful step would be to look for the relationship between the growth and the debt. While debt has a meaning,which harbors more than bank loans, we only content ourselves with the banking data, because it is technically more applicable to work with. For growth, we factor in the (nominal) GDP data released by official stats office. To have easier to read and more organized data, we walk through the process of year-over-year changes in total outstanding look book of Turkish banking sector and the nominal GDP with quarterly steps, and we exclude three quarters of GDP data in 2009 where negative numbers occur, that are statistically impossible to taken into account as we basically seek for the result of an regression analysis between two variables (no natural log of negative numbers).

Before moving out of technical space and providing a clear explanation of things, let us present our first regression analysis where the natural log of yoy change in nominal GDP is the dependent variable, and the yoy change in total loans in the independent one.

For the average reader, the number of 0.69 is where the attention should be paid on. Other figures just test the quality of our estimation which seems quite good. Our findings thereby suggest that changes in the total amount of outstanding loans in the bans explains almost 70% of the changes in nominal GDP.

Turning back to our question in this first place, we need to investigate if the seemingly strong relationship weakens in any point at time. We need to advance our econometric modelling to find out about patterns hidden in the data. To this end, we prefer to employ a non-linear model that changing regime functionality. known as Markov regime switching model, that allows us to detect if any structural change is the case. We run the same data equation the aforementioned model with two regimes and regime-specific error variances where the latter helps us to distinguish between two output. The model produces two different equations just as one the seen above and transition probabilities between two regimes.

Model results let us assess the relationship between two macro variables under two regimes. First regime prints comparatively lower coefficient for the independent variable of loans and a higher error variance in absolute terms. We thereby call this one as the “weaker” relationship regime, as the latter regime picture a “stronger” one. Nevertheless, differentiation between two regimes can be assumed not to be radical as coefficients of Log_Loans under two different regimes are close.

To add another dimension to our analysis, we can go and deeper investigate how transition probabilities for each regime changes in time. The chart below does that.

Graph above presents two lines oscillating between 0 and 1 and summing up to 1. Closer to 1, the more dominant the regime is for the given time. Or translating what it means to us, it seems clear that relationship between loan growth and GDP growth was somehow weaker in 2004 and in 2017-18 period. This, we believe, is the most striking output of our analysis.

We think that it is highly significant to put the emphasis on 2017-18 where the red line is inclined to be very close to 1 meaning that the relevance of two macro variables under our analysis weakened. Please remember that 2017 Q1 marked the beginning of enhancing Credit Guarantee Fund (CGF) which was an initiative of the government allowing banks to provide loan to companies through a state-guaranteed scheme. While this undeniably helped the companies with a fresh round of cash inflows (however in the form of debt), it caused a slight divergence between the debt and the economic output. Decrease in the marginal output of a production process as the amount of a single factor of production is incrementally increased, also known as diminishing returns, could be what Turkey faces today as the credit does not turn into economic output the way it used to. Considering the path that the global economy has been and will be through, it is fair to stay cautions of the emerging risks to the effectiveness of the credit. The optimum solution at this stage would be managing Turkey’s rebalancing process by having diversified funding sources (less debt, more equity) and establishing a more market-driven loan system. 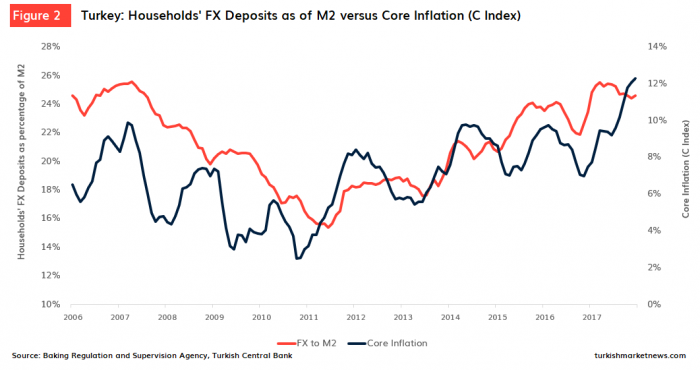