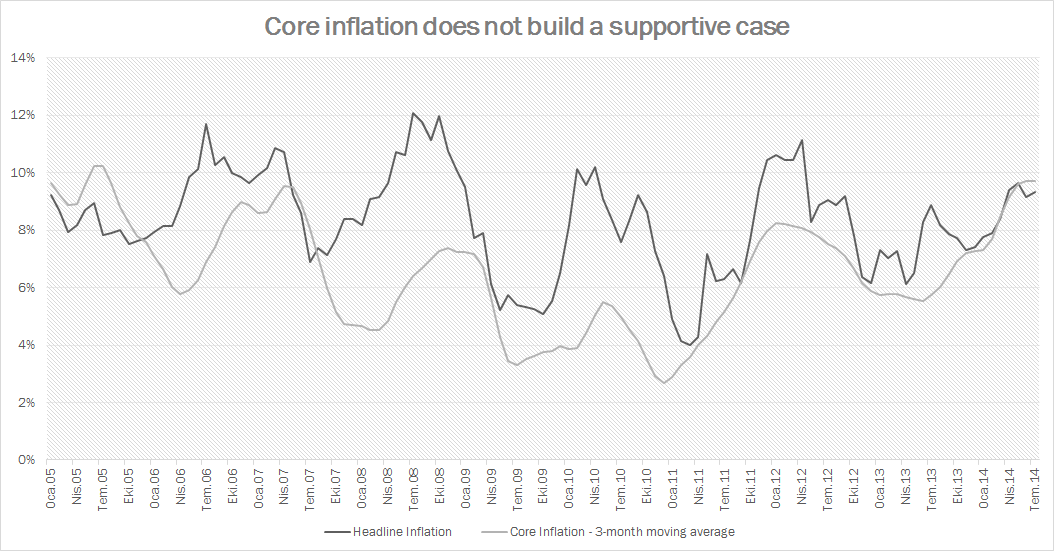 Turkey’s year-on-year inflation target has never been achieved and it seems like this setback will continue this year. The inflation data for July came out this morning and shocked many economists covering Turkey whose CPI estimates around 9% were beaten by the actual numbers. According to Turkey’s Stats Office, consumer price index in July was 9.32% meaning an unexpected pick-up mostly due to higher food prices. However the core inflation data indicates that the most recent failure in Turkey’s inflation targeting story could be related to how the Central Bank of Turkey uses the interest rates as a monetary policy tool. The idea is materialized in the following chart. And still Central Bank of Turkey is expected to cut the rates in upcoming monetary policy committee. When it comes to predicting the next move by CBT, economists separate their comments into two categories as what the CBT should do and what the CBT will do, and in general we see these comments conflicting one another which means the CBT is actually doing what it shouldn’t do. Here I call all this as one of the most famous line said in the history of space movies: “Houston, We’ve got a problem”. In a deflationary environment Turkey awkwardly has an inflation problem, and even worse, the global inflation is about to come back.